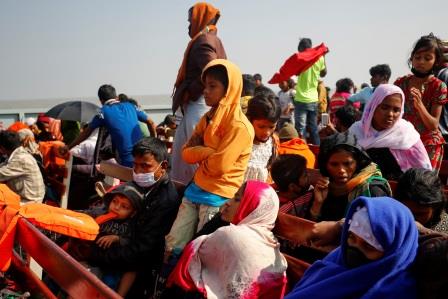 DHAKA (BANGLADESH) – More than 1,400 Rohingya Muslim refugees set sail for the remote island Bhasan Char, in the Bay of Bengal on Saturday, a Bangladesh navy official said. Rights groups have been vehemently opposing the move citing concerned about the site’s vulnerability to storms and flooding.

“We are ready to receive the new arrivals,” said Commodore Abdullah Al Mamun Chowdhury, the officer in charge of the island. Five ships left with the Rohingya and their belongings after they were transferred from the camps to the nearby port city of Chittagong” he added.

The Rohingya, a minority group who fled violence in Buddhist-majority Myanmar, are not allowed to move off the island without government permission.

Though Bangladesh says the relocation is voluntary, some of the first group of refugees who were moves to the island in December, spoke of being coerced. The government also says overcrowding in camps in the Cox’s Bazar district fuels crime.

It has dismissed flood concerns over the island, citing the building of a 12-km (7.5-mile) stretch of embankment 2 metres (6.5 feet) high, in addition to housing for 100,000 people, hospitals and cyclone centres.

Bangladesh has drawn criticism for a reluctance to consult with the United Nations refugee agency and other aid bodies over the transfers. The U.N. High Commissioner for Refugees says the agency has not been allowed to evaluate the safety and sustainability of life on the island.

“We look forward to continuing a constructive dialogue with the government regarding its Bhasan Char project, including the proposed U.N. technical and protection assessments,” it said in an email.