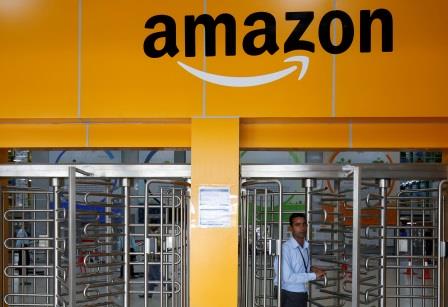 FILE PHOTO: An employee of Amazon walks through a turnstile gate inside an Amazon Fulfillment Centre (BLR7) on the outskirts of Bengaluru, India, September 18, 2018. REUTERS/ Abhishek N. Chinnappa/File Photo

NEW DELHI (INDIA) – A US lobby group has urged India not to tighten foreign investment rules for e-commerce companies again. The U.S.-India Business Council (USIBC), part of the US Chamber of Commerce, urged the Indian government not to make any more material restrictive changes to e-commerce investment rules via a letter. The lobby represents firms including Amazon.com and Walmart.

India is mulling the idea of revising the rules after traders in the country accused Amazon’s Indian division and Walmart’s Flipkart of creating complex structures to bypass investment regulations.

India only allows foreign e-commerce players to operate as a marketplace to connect buyers and sellers but local traders say the US giants promote select sellers and offer deep discounts, which hurts business for smaller local retailers.

The US companies deny any wrongdoing.

In 2018, India changed its foreign direct investment (FDI) rules to discourage foreign firms from offering products from sellers in which they have an equity stake.

The government is now considering tightening those rules again to include sellers in which a foreign e-commerce firm holds an indirect stake through its parent.

Amazon could be one of the companies at the receiving end as it holds indirect stakes in two of its biggest online sellers in India, Cloudtail and Appario.

“Any further changes in FDI rules would limit e-commerce firms from leveraging their scale,” USIBC said in the letter.

USIBC also asked India’s Department for Promotion of Industry and Internal Trade (DPIIT) to engage in substantive consultation with companies on e-commerce regulation.

Earlier the Confederation of All India Traders (CAIT), which represents millions of brick-and-mortar retailers, said it has received assurances from India’s commerce minister that policy changes would not go ahead.

On Saturday, CAIT in a statement said the USIBC letter was an “uncalled for intervention” which runs against the interest of 85 million traders. “Such a hue and cry is not understandable,” CAIT said, adding that it had also written a letter in protest to the USIBC President.

Industry sources are of the opinion that the prospects of such frequent policy changes in India have alarmed Amazon, which has committed $6.5 billion in investments in India, and Walmart, which invested $16 billion in Flipkart in 2018.

“USIBC is concerned that material changes to the FDI policy creates uncertainty and impacts investor confidence, as well as business continuity of existing investments,” it said.