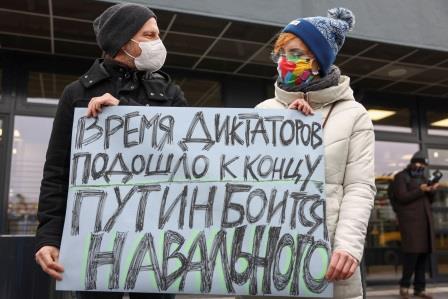 FILE PHOTO: A couple hold a banner reading ''Dictators times come to an end, Putin is scared of Navalny'' as they wait for the arrival of Russian Kremlin critic Alexei Navalny, outside the Terminal 5 of Berlin Brandenburg Airport, in Berlin, Germany, January 17, 2021. REUTERS/Christian Mang/File Photo

MOSCOW (RUSSIA) – Russia is gearing up for fresh round of street protests by supporters of jailed Kremlin critic Alexei Navalny. The protests will be held in Moscow and across Russia on Sunday for a second straight weekend despite a massive crackdown.

Navalny, a staunch critic if President Vladimir Putin, was arrested on Jan.17 after he returned from Germany. He had been recovering from a nerve agent poisoning in Russia. The 44-year-old opposition politician has accused Putin of ordering his murder, which the Kremlin denies.

Navalny is accused of parole violations which he says are false accusations. A court is due to meet next week to consider handing him a jail term of up to three and a half years.

The protests, despite the threat of arrest, following Navalny’s dramatic return to Moscow has put Putin in a predicament over how to respond. Polls show pent-up frustrations among Russians over years of falling wages and fallout from the pandemic.

The West has told Moscow to let Navalny go and his allies have appealed to US President Joe Biden to sanction 35 people who they say are Putin’s close allies.

In a bid to gain support at home, Navalny has accused Putin of being the ultimate owner of a sumptuous Black Sea palace in an online video which was viewed over 100 million times. An accusation that the Kremlin leader has denied. On the eve of the protests, Arkady Rotenberg, a businessman and Putin’s former judo sparring partner, said he owns the property.

Police have warned that Sunday’s protests will be broken up similar to last weekend as it has not been authorised and will be considered illegal. They have also said demonstrators could spread COVID-19. Police said on Friday they would close seven metro stations and restrict pedestrian movement in the area due to the protest plans.