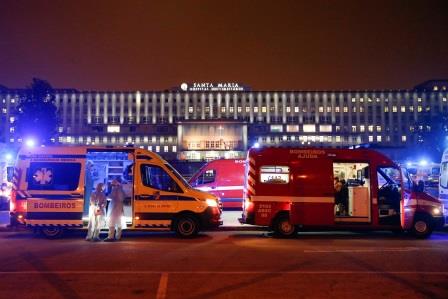 BERLIN (GERMANY) – With Portugal hospital’s intensive care units running out of space German military will will send in medical staff and equipment , the defence ministry in Berlin said on Sunday.

Portugal, which said on Saturday that only seven of 850 ICU beds set up for COVID-19 cases on its mainland were vacant, had asked the German government for help.

“We will support Portugal with medical staff and equipment,” a defence ministry spokesman told Reuters, adding that details were expected to be announced early this week.

A German magazine said the military planned to send 27 doctors and paramedics to Portugal who were initially supposed to remain there for three weeks, as well as stationary and mobile ventilators and field beds for patients.

Portugal, which has reported 12,179 COVID-19 deaths and 711,018 cases, has the world’s highest seven-day rolling average of cases and deaths per capita, according to data tracker.

Nobel Peace Prize – Navalny, WHO and Thunberg among nominees

Nobel Peace Prize - Navalny, WHO and Thunberg among nominees