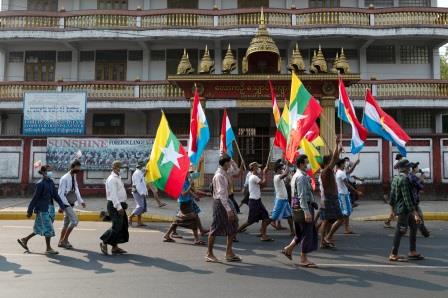 YANGON (MYANMAR) – Myanmar’s new lawmakers have vowed to take their seats in parliament for the first time on Monday. They said they were undaunted by threats from the army and fears of a coup after the military alleged last year’s election was fraudulent.

Myanmar’s military had threatened to “take action” last week over alleged fraud in a November election won by the party of Aung San Suu Kyi. However, the election commission had rejected the allegations, saying there were no errors big enough to affect the credibility of the vote.

In a statement on Saturday, the army appeared to going back on their threat, stating it would protect and abide by the constitution and act according to law, but pro-military demonstrations continued in major cities.

About 300 people marched through the commercial capital of Yangon on Sunday waving banners and chanting in support of the military and against foreign intervention in the country’s internal affairs.

Myanmar’s lower house is set to convene on Monday but state media announced over the weekend the first session of the upper house had been rescheduled to Tuesday.

Monywa Aung Shin, a spokesman for the NLD, said representatives from all parties including those from the military were receiving vaccinations against COVID-19 in order to attend parliament on Monday.

“I believe that everyone will attend the parliament tomorrow,” he said.

Many lawmakers from the ruling party spent years in jail under the former military government, which ruled for half a century until reforms began in 2011.

“I will go to parliament on Monday as we are members of parliament elected by the people,” said NLD lawmaker Phyu Phyu Thin, a former political prisoner. “This is not new for us,” she said.

Nai San Tin, a representative from the Mon Unity Party, said he was prepared to face any situation.

“We knew we would experience this kind of situation sooner or later,” he said.

“Especially being a politician in Myanmar, we cannot avoid this.”