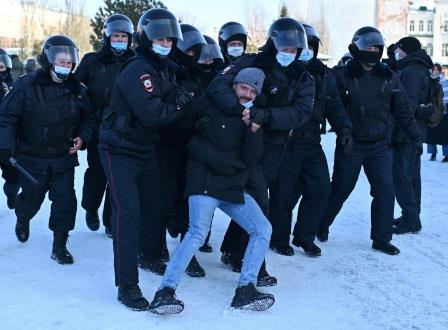 MOSCOW (RUSSIA) – Supporters of Kremlin critic Alexei Navalny took to the streets to protest his jailing on Sunday. Police detained more than 1,000 people and broke up rallies in Moscow and across Russia.

Yulia, a 40-year-old protester in Moscow, said she had come to the protests despite having a panic attack the night before because of worrying about repercussions for taking part.

“I understand that I live in a totally lawless state. In a police state, with no independent courts. In a country ruled by corruption. I would like to live differently,” she said.

The nationwide protests are part of the campaign to pressure the Kremlin into freeing President Vladimir Putin’s most prominent critic.

The opposition politician was arrested on Jan. 17 after returning to Moscow from Germany where he had been recovering from a nerve agent poisoning in Russia last summer. He accuses Putin of ordering his murder, which the Kremlin denies.

Crowds of protesters were scattered about in Moscow after the organisers twice changed the planned gathering point as police took highly unusual steps to seal off pedestrian access to areas of the capital and shut down metro stations.

According to police the turn out at Moscow is around 300 people.

In the far eastern city of Vladivostok, police prevented protesters from accessing the city centre, forcing them to relocate to the waterfront by the frozen Amur Bay.

Video footage showed protesters chanting “Putin is a thief” as they linked hands and marched on the ice in temperatures of around -13 Celsius (8.6 Fahrenheit). Police detained more than 100 people in the city, OVD-Info said.

Demonstrators in Tomsk, the Siberian city that Navalny visited before suddenly collapsing on a domestic flight last August, gathered at a concert hall and chanted “Let him go!”.

Dozens turned out in the east Siberian city of Yakutsk despite temperatures of -42 C (-44 F).

“This is the first time I’ve come to a protest. I’m just fed up with the total lawlessness of the authorities,” said Ivan, a protester who declined to give his surname.