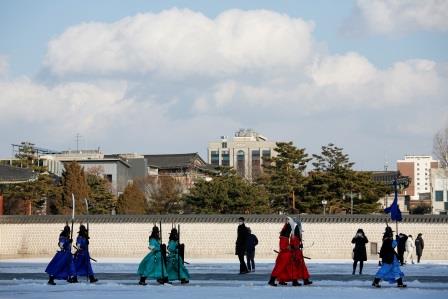 FILE PHOTO: Workers wearing traditional attire walk on a cold winter day, amid the coronavirus disease (COVID-19) pandemic during the daily re-enactment of the changing of the Royal Guards at Gyeongbok Palace in central Seoul,?South Korea, January 28, 2021. REUTERS/Heo Ran

SEOUL (SOUTH KOREA) – Social distancing restrictions will be extended until the end of the Lunar New Year holidays as new infection clusters emerge in the country, Prime Minister Chung Sye-kyun said on Sunday.

There were expectations that the government will ease rules such as restaurant curfew and ban on gatherings of more than four people. But health authorities decided to maintain the curbs after a new large outbreak emerged from missionary training schools across the country last week.

“The government is planning to extend the current distancing levels and anti-virus standards as they are until the Lunar New Year holidays end. The third COVID-19 wave, which had temporarily slowed, is again threatening our daily lives following the group infections from the missionary institutes,” Chung told an intra-agency meeting.

Chung said the ongoing spread must be further dampened to facilitate South Korea’s vaccination campaign and the start of the spring school semester, which are respectively set for February and March.

“This decision was not easy,” Chung said.

The Korea Disease Control and Prevention Agency (KDCA) reported 355 new cases as of Saturday midnight, as the numbers fell under 400 for the first time in five days owing to less testing during the weekend.