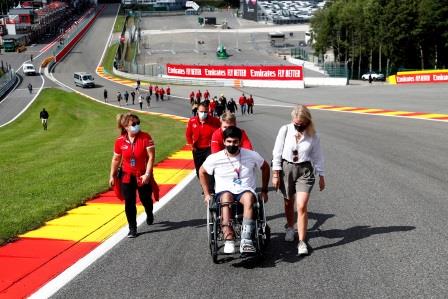 Ecuadorian- After a near fatal crash that caused him severe leg injury, American Juan Manuel Correa has announced his return to racing on Monday after recovering. The massive collision which occurred in 2019 at Formula Two crash led to the death of Frenchman Anthoine Hubert.

“Announcing my return to the race tracks is one of the proudest moments in my professional career,” 21-year-old Correa said in a statement, promising to honour Hubert’s memory.

“My dream is still to reach F1 and this is the first step in my comeback.”

Hubert, 22, died after he crashed and his stationary car was then hit by Correa’s during the Belgian Grand Prix support race at Spa-Francorchamps.

The FIA said in a subsequent report that Correa hit Hubert’s virtually stationary car at 218 kph.

Hubert was the first driver to die at a Formula One race weekend since Brazilian triple champion Ayrton Senna and Austrian Roland Ratzenberger at Imola in Italy in 1994.

Correa suffered 20 fractures to his legs and feet, spending two weeks in an induced coma and wearing a leg brace for more than a year. He underwent 25 bouts of surgery to his legs but avoided amputation.