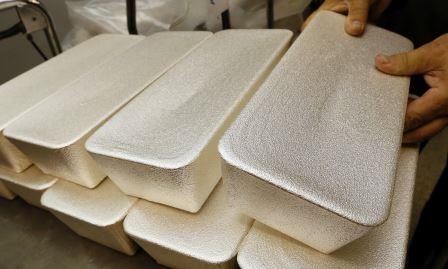 FILE PHOTO: An employee places ingots of 99.99 percent pure silver on a cart at the Krastsvetmet non-ferrous metals plant, one of the world's largest producers in the precious metals industry, in the Siberian city of Krasnoyarsk, Russia September 22, 2017. REUTERS/Ilya Naymushin/File Photo

SINGAPORE – After an army of retail traders started betting billions on stocks last week, they rushed into Silver, which broke above $30 an ounce for the first time since 2013 on Monday. The has triggering risks of a multi-asset melt-up in global markets.

Organised in online forums and traded with fee-free brokers such as Robinhood, small-time investors have driven a 1,600% rally in the shares of video game retailer GameStop, taking home assets big fund managers had bet against.

The phenomenon spilled over into silver late last week.

Spot silver leapt more than 11% in London to $30.03 an ounce and was on track for its biggest one-day rise since 2008, taking gains to about 19% since last Wednesday.

The jump set off a rally in silver-mining stocks from Sydney to London, with Fresnillo shares soaring 20.5% to top the UK blue-chip FTSE 100 index.

“I would look at the silver rally the same way as I would the GameStop saga – from the point of view of market stability, for now it’s not an immediate concern, but if we see sharp moves we could see some deleveraging in markets,” said Antoine Bouvet, a rates strategist at ING.

“This reducing of risk through deleveraging could potentially boost demand for bonds if it is causing excess volatility.”

In the first signs of deleveraging, Goldman Sachs said the amount of position-covering last week by U.S. hedge funds, buying and selling, was the highest since the financial crisis more than a decade ago.

Russia – Prosecutors back jail term for Navalny, Kremlin tells US to back off

Russia - Prosecutors back jail term for Navalny, Kremlin tells US to back off