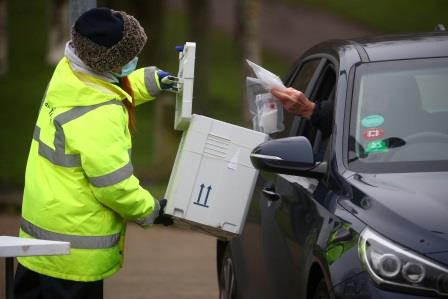 A worker collects a swab from a car window at a test centre in Goldsworth Park, as the South African variant of the novel coronavirus is reported in parts of Surrey, in Woking, Britain, February 1, 2021. REUTERS/Hannah McKay

LONDON (UK) -The South African variant of COVID virus has been detected amongst eleven people in different regions of England. It has been found that none of them have any links to people who have travelled, prompting mass testing in the areas to contain the outbreak.

To contain the new outbreaks, residents in eight areas of the country will now be tested whether or not they are showing any symptoms, a process known as “surge testing”.

There are about 10,000 people in each area. Three are in London, two in the southeast, one in central England, one in the east and another in the northwest. The government said on Monday the 11 cases were self-isolating and contact tracing would help to halt the spread.

Positive tests in the areas will be sequenced to identify any further spread of the South African variant, the government statement said.

Britain, with the fifth-highest COVID-19 death toll in the world, has moved to tighten its borders out of concern that new variants of the virus will undermine its vaccination drive.

The emergence of the new variant has raised questions over whether vaccines will prove as effective in containing them.

Britain said on Jan. 24 it had detected 77 cases of the South African variant and nine cases of the Brazilian variant, but said all were linked to travel.

In total, Public Health England said it had now identified 105 cases of the South African variant since Dec 22.

Simon Clarke, associate professor in cellular microbiology at the University of Reading, said there was emerging evidence to suggest the variant was less susceptible to immunity induced by the current crop of vaccines.

“The discovery of a handful of cases with no links to travel to Africa, indicates that it might be more widespread in the community than previously thought,” he said.

“This spread, even if small in scale, needs to be brought under control quickly, so Public Health England’s house-to-house checks, and intensive testing are the right thing to do.”

Britain is however making rapid progress in its vaccination programme, with nearly 9 million people receiving the first shot of either the Pfizer-BioNTech or the Oxford-AstraZeneca shot.