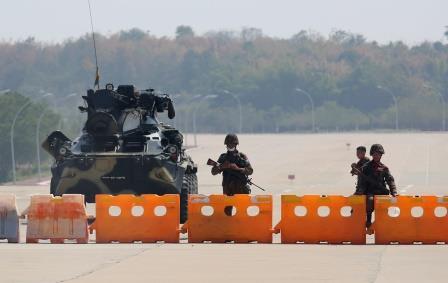 Myanmar's military checkpoint is seen on the way to the congress compound in Naypyitaw, Myanmar, February 1, 2021. REUTERS/Stringer

YANGON (MYANMAR) – In the wake of the Myanmar military seizing power, the US has threatened to reimpose curbs on the generals. The whereabouts of detained leader Aung San Suu Kyi remain unknown 24 hours after her arrest.

Diplomats said the UN Security Council would meet on Tuesday amid calls for a strong response to the coup and the detention of the Noble Peace Laureate and dozens of allies on Monday.

The military seized power after a landslide victory for Suu Kyi’s National League for Democracy (NLD) in the elections held in November. The military refused to accept the outcome of the polls, citing allegations of fraud.

After seizing power, the military handed over reins of the government to General Min Aung Hlaing and imposed a state of emergency for a year. This has throttled hopes of the impoverished nation returning to stable democracy after decades of military interference in politics.

US President Joe Biden called the situation in Myanmar a direct assault on the nation’s transition to democracy and the rule of the law.

“We will work with our partners throughout the region and the world to support the restoration of democracy and the rule of law, as well as to hold accountable those responsible for overturning Burma’s democratic transition,” he said in a statement.

The coup in Myanmar is one of the first major tests of the new president’s pledge to collaborate more with allies in defusing global crises. However, the stance is in sharp contrast with former President Donald Trump’s ‘America First’ policy.

The UN condemned the coup and demanded the release of the detainees and restoration of democracy in the poverty-stricken nation. Countries such as Australia, the European Union, India, Japan slammed the military action in Myanmar.

Strangely, China did not flay the coup and said that it noted the event and urged all sides to adhere to the constitution. Neighbouring countries such as Thailand preferred not to meddle in the internal affairs of Myanmar.

The streets in towns and cities were quiet overnight as there is a curfew in place to curb the spread of the pandemic. Troops and policemen in riot gear took up positions in Yangon.

Telephone and internet connections were restored on Tuesday morning, but the airport remained closed.

After stopping financial transactions a day earlier because of the internet outage, banks in Yangon reopened on Tuesday and there was a huge rush to withdraw cash.

There is no information regarding the whereabouts of Suu Kyi, President Win Myint and other NLD leaders.

Anticipating her arrest, Suu Kyi called for protests against military rule in a statement issued on Monday.