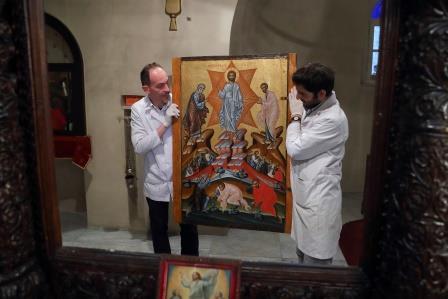 Venizelos Gavrilakis, a senior restorer and conservator from Thessaloniki, Greece, and his assistant Umut Ballikaya carry a 16th century Byzantine Christian icon after they completed cleaning and restoration work at a Greek Orthodox church where Gavrilakis set up his laboratory in Istanbul, Turkey January 26, 2021. REUTERS/Murad Sezer

ISTANBUL (TURKEY) – Amid growing concerns in Turkey over the preservation of the nation’s Byzantine heritage, Greek restorer Venizelos Gavrilakis relentlessly goes ahead with his task of restoring sacred artefacts in churches in Istanbul. He uses microscopes, cotton swabs and a delicate touch to lend new life to centuries-old icons used for worship in Greek Orthodox churches.

After shifting from Thessaloniki eight years ago, Gavrilakis, 44, and his colleagues have been able to restore icons, frescoes and paintings in 25 churches in the city.

The outbreak of the pandemic made their job of restoring a 16th century icon showing the Transfiguration of Jesus Christ take longer than expected.

Priceless religious and cultural works throughout history were damaged or lost in war before Turkey became a secular Republic.

Gavrilakis said the restoration comes with lifetime guarantee and by restoring the religious icons, a message of unity and longevity is sent out to worshippers who have been kept apart by the pandemic.

“The pandemic will pass, in order to fight it we all should remain spiritually united,” Gavrilakis said. “Our work on these precious and timeless artefacts will always be there for the people to see it and get inspiration and strength from it.”

Orthodox leaders and Western nations slammed Turkey’s decision last year to convert the Hagia Sophia and the Chora church into mosques. Experts also worried that the conversion could harm the frescoes and other artefacts in the two structures.

The restorer has trained in Italy and Greece where he has worked on more than 40 churches. He and his team are called Parakatathiki Labs and the oldest icon they have restored in Istanbul is a Fayum portrait from the 2nd or 3rd century BC.

The artefacts, he said in an interview, “remind people of the unlimited possibilities of the human mind that can create such wonderful things that live through the centuries.”