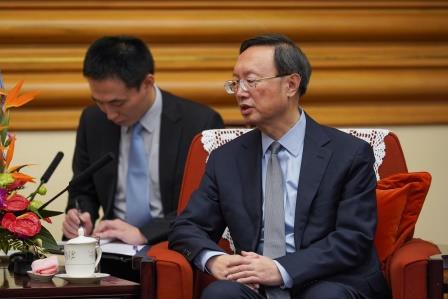 BEIJING (CHINA) – A top Chinese diplomat on Tuesday urged Beijing and Washington to put ties back on a predictable and constructive path, adding the US should desist from meddling in the internal affairs of China such as Hong Kong and Tibet.

Yang Jiechi, director of the Central Foreign Affairs Commission of the Chinese Communist Party, is the highest-ranking diplomat to speak on Sino-US ties ever since President Joe Biden took office.

When President Donald Trump was in power, the relations between the two nations had reached their nadir since the establishment of diplomatic ties in 1979. Both sides have argued over issues such as trade, technology, Hong Kong, Taiwan, Xinjiang and the South China Sea.

Yang reassured the US that Beijing has no intention to challenge or replace the position of Washington in geopolitics and stressed that no force can hold back China’s development.

“The United States should stop interfering in Hong Kong, Tibet, Xinjiang and other issues regarding China’s territorial integrity and sovereignty,” Yang said, adding that those issues pertain to China’s core interests and national dignity.

While addressing a virtual forum hosted by the National Committee on US-China Relations on Tuesday in Beijing, Yang said China never interferes with US internal matters, including the elections.

Given his position in the Communist Party, Yang is more powerful than the foreign minister and he urged the Biden administration not to misuse the concept of national security in trade.

“We in China hope that the United States will rise above the outdated mentality of zero-sum, major-power rivalry and work with China to keep the relationship on the right track,” he said.