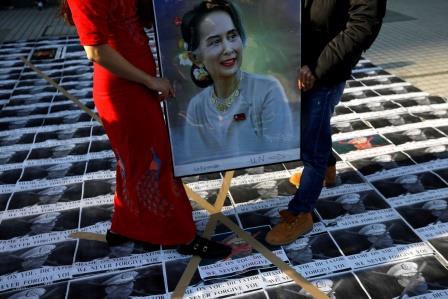 Myanmar protesters residing in Japan stand on pictures of Myanmar's army chief Min Aung Hlaing as they rally against the country's military after it seized power from a democratically elected civilian government and arrested its leader Aung San Suu Kyi, shown in the portrait, at United Nations University in Tokyo, Japan February 1, 2021. REUTERS/Issei Kato

YANGON (MYANMAR) – The political party of detained Myanmar leader Aung San Suu Kyi sought her release on Tuesday and for the military junta to recognise her victory in the November elections. This comes a day after a military coup sparked outrage across the world.

More than 24 hours after her arrest, the whereabouts of the Noble Peace laureate remains unknown and the only communication from her anticipating the coup and subsequent crackdown on leaders came in the form of a communication urging protests against the military dictatorship.

The coup came after her National League for Democracy (NLD) won a landslide victory in the Nov. 8 elections, a result the military has refused to accept citing unsubstantiated claims of fraud.

After the coup, the military handed over power to its commander General Min Aung Hlaing and declared a state of emergency for a year. The executive committee of the NLD sought the immediate release of all who are detained.

Summer Olympics will be held regardless of pandemic situation: Tokyo 2020 president

Summer Olympics will be held regardless of pandemic situation: Tokyo 2020 president