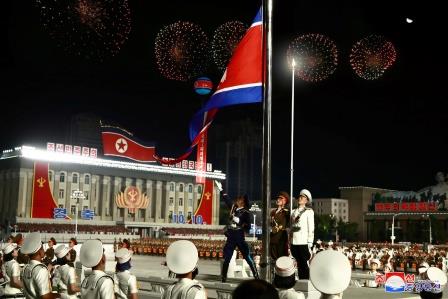 FILE PHOTO: The North Korean flag waves during a parade to mark the 75th anniversary of the founding of the ruling Workers' Party of Korea, in this image released by North Korea's Central News Agency on October 10, 2020. KCNA via REUTERS

GENEVA (SWITZERLAND) – The UN Human Rights office said on Tuesday that torture and forced labour are rife in North Korean jails and they amount to possible crimes against humanity. This comes as the new administration of US President Joe Biden is mulling fresh curbs on Pyongyang’s nuclear programme.

The report comes seven years after a key UN probe found that crimes against humanity were being committed in that country. It also said that political prison camps run by security forces still existed although information about them is sketchy.

“Not only does impunity prevail, but human rights violations that may amount to crimes against humanity continue to be committed,” Michelle Bachelet, UN High Commissioner for Human Rights, said in a statement.

“Accountability for grave human rights violations and ongoing crimes against humanity should not be a secondary consideration in bringing North Korea to the negotiating table,” human rights spokeswoman Ravina Shamdasani said.

US Secretary of State Antony Blinken told NBC News on Monday that additional curbs could be used against North Korea in coordination with allies in a bid to denuclearise the Korean peninsula which is divided.

North Korean government denies the allegations about political camps and last July it denounced Britain for slapping sanctions against two organisations, which according to the British government, are involved in forced labour, torture and murder in the camps.

Referring to interviews with former detainees, the report said it continued to receive “consistent and credible accounts of the systematic infliction of severe physical and mental pain or suffering upon detainees, through the infliction of beatings, stress positions and starvation in places of detention.”