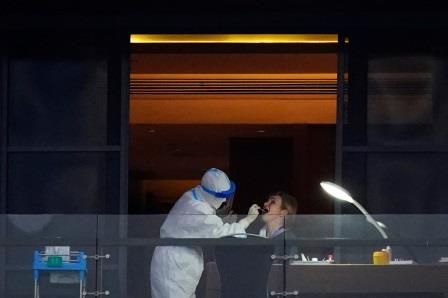 Professor Thea Fisher, a member of the World Health Organisation (WHO) team tasked with investigating the origins of the coronavirus disease (COVID-19), receives a swab test on the balcony of a hotel in Wuhan, Hubei province, China February 3, 2021. REUTERS/Aly Song

WUHAN (CHINA) -WHO-led team of experts visited a virus research laboratory in China’s central city of Wuhan and met with a prominent virologist there.

The experts who are in search of clues to the origins of the pandemic, spent about 3-1/2 hours at the heavily-guarded Wuhan Institute of Virology, which has been at the centre of some conspiracy theories that claim a laboratory leak caused the city’s first coronavirus outbreak at the end of 2019.

Shi, who has long focused on bat coronaviruses – earning her the nickname “Bat Woman” – was one among the first to isolate the novel coronavirus that causes COVID-19.

While Shi, rejects the hypothesis of a lab leak, some experts speculate that a virus captured from the wild could have figured in lab experiments to test the risks of a human spillover and then escaped via an infected staff member.

“Very interesting. Many questions,” Thea Fischer, a Danish member of the team, called from her car as it sped away from the lab following Wednesday’s visit, in response to a question whether the team had found anything.

The team will spend two weeks conducting field work after having completed two weeks in hotel quarantine after arrival in Wuhan.