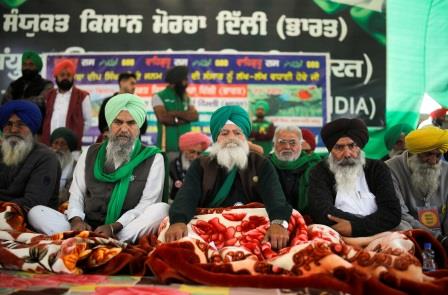 NEW DELHI (INDIA) – After International star Rihanna posted a tweet in support of protesting Indian farmers, a number of other prominent Western social media stars and activists joined in to support the farmers.

Tens of thousands of farmers have been camped out on the outskirts of the capital, New Delhi, since late last year, braving the winter chill to oppose three new laws the government says will make the sector more efficient.

Though the protests were largely peaceful, things took a violent turn last week when a farmers’ procession of tractors entered the heart of Delhi and some protesters confronted police, who responded with tear gas and batons.

“We ALL should be outraged by India’s internet shutdowns and paramilitary violence against farmer protesters,” US lawyer and activist Meena Harris, the niece of Vice-President Kamala Harris, said on Twitter.

“We stand in solidarity with the #FarmersProtest in India,” Thunberg wrote.

Support started pouring in after singer Rihanna posted an article on the demonstrations to her 101 million Twitter followers, also using the #FarmersProtest tag.

Some supporters of Prime Minister Narendra Modi’s government hit back at the foreign comment.

Actress Kangana Ranaut described the protesting farmers as “terrorists who are trying to divide India”.

“Sit down you fool, we are not selling our nation,” Ranaut said in reply to Rihanna’s post.

The government insists the reforms, which will allow big retailers to buy directly from growers, will benefit farmers and draw investment to a sector that makes up nearly 15% of India’s $2.9 trillion economy and employs about half its 1.3 billion people.

The farmers say the reforms will mean the end of long-standing guaranteed prices for their crops and leave them vulnerable to the whims of big business.

The farmers are demanding the withdrawal of the three laws, introduced in September. The government has offered some concessions but has ruled out abandoning the reforms.