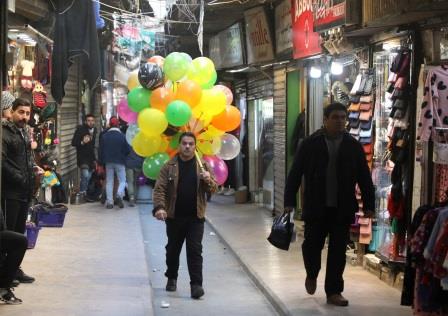 A man sells balloons at a souk, during a lockdown to curb the spread of the coronavirus disease (COVID-19), in Tripoli, Lebanon February 1, 2021. REUTERS/Mohamed Azakir

TRIPOLI (LEBANON) – Tripoli has once again hit by violent protests last week. According to some politicians and experts unrest could spread if more is not done to support people facing deepening poverty amid coronavirus restrictions.

The country was already facing a spiraling national debt, high unemployment and a tumbling currency stoking inflation even before the pandemic struck.

For residents of Tripoli, considered the poorest city, a 24-hour curfew imposed from Jan. 11 to control the spread of COVID-19 which prevented many from going out for work. This turned out to be the final straw.

“We are headed towards famine,” said Haytham Kurdi, a 49-year-old fish kiosk owner in the city.

Last week protests culminated in the burning of Tripoli’s municipality building as demonstrators clashed with police.

“There is practically a total absence of government action, so the situation in Tripoli is … worrisome and it reflects an extreme form of what is happening elsewhere in the country,” said Toufic Gaspard, an economist who has worked as an adviser at the IMF and to a former finance minister.

More Lebanese will feel the pinch if subsidies on basic foodstuffs like bread are eased because of dwindling reserves and dollar shortages.

Nationwide protests erupted in October 2019, amid financial meltdown, bringing cities including the capital Beirut to a standstill as tens of thousands of people vented their anger at politicians they blamed for ineptitude and graft.

Today, roughly half of the workforce relies on daily wages mostly paid in local currency, and a recent study by aid organization CARE found that 94% of Lebanon’s population are earning less then the minimum wage.

“Should subsidies be lifted, the scene from Tripoli will be repeated everywhere,” MP Faisal Karameh told local media.