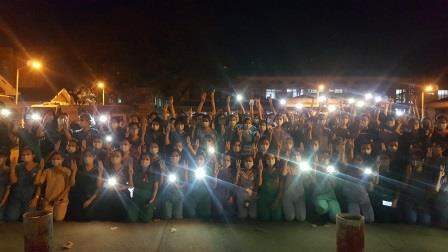 Amid growing protests against the coup, Myanmar’s junta blocked Facebook in the name of ensuring stability on Thursday. Activists said at least three people were arrested at a street protest.

Opposition to the junta has emerged very strongly on Facebook, which is the country’s main internet platform and underpins communications for business and government. Facebook’s WhatsApp messaging was also blocked.

Protestors livestreamed some of the initial street protest against the coup on Facebook, from the second city of Mandalay.

“People’s protest against military coup,” read one of the banners.

Three people were arrested after the protest, three separate student groups said. Reuters was unable to contact police for comment.

The social network has also been used to share images of a campaign of disobedience by staff at government hospitals across the country, with doctors stopping work or wearing ribbons in the red colour of Suu Kyi’s National League for Democracy.

Pictures shared on Wednesday showed workers at the agriculture ministry joining the campaign too.

Norway’s Telenor Asa, Myanmar’s leading mobile network operator, said it had no choice but to comply with the directive to block Facebook.

“Telenor does not believe that the request is based on necessity and proportionality, in accordance with international human rights law,” it said in a statement.

Facebook spokesman Andy Stone urged authorities to restore connectivity “so that people in Myanmar can communicate with their families and friends and access important information”.

Some people used VPNs to evade the blockage. Twitter, which was not blocked, saw an increase in new users. #CivilDisobedienceMovement was the top trending hashtag in the country, with #JusticeForMyanmar close behind.