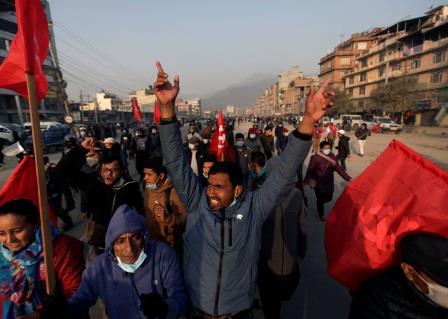 Protesters affiliated with a faction of the ruling Nepal Communist Party march during a general strike against the appointment of dozens of officials to constitutional bodies, saying due process of law was not fulfilled, in Kathmandu, Nepal February 4, 2021. REUTERS/Navesh Chitrakar

KATHMANDU (NEPAL) – A strike called by a faction of the ruling party lead to a nationwide protest rally which ended up injuring two former ministers and six other people, when police threw tear gas shells and resorted to baton charges. Police said at least 157 people were detained across the country to curb the violence.

The call for a strike came after Oli earlier this week appointed senior officials to constitutional bodies, including commissions on human rights and investigations into abuse of authority. Opponents in the NCP accused Oli of bypassing a requirement for appointees to be approved by parliament.

Two former ministers, Ram Chadra Jha and Matrika Yadav, who are also senior leaders of the rival faction of the ruling party, were among the injured in the temple town of Janakpur in Dhanusa district.

“They (former ministers) are being brought to Kathmandu by a helicopter for treatment,” said senior faction leader Pampha Bhusal, who, along with her colleagues, had declared the strike.

Oli had dissolved parliament on Dec. 20, after citing a lack of cooperation from other leaders of his Nepal Communist Party (NCP).This move led led to the call for strike which forced businesses, shops and educational institutions to shut down.

Supreme Court judges hearing more than a dozen petitions challenging the legality of parliament’s dissolution are expected to give a verdict this month.

If they rule in Oli’s favour, elections have been scheduled in two phases, on April 30 and May 10.

In late December, the Chinese Communist Party sent senior officials to Kathmandu to see if they could mend ties between the factions in a party regarded as friendly to Beijing.