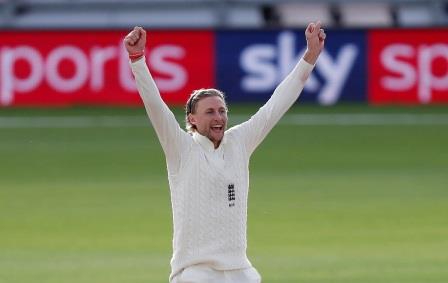 England, despite steady start to be 67-2 at lunch, has left captain Joe Root with a rebuilding job in his 100th test when the team began to stutter on day one of the opening test against India in Chennai on Friday.

The team got off to a strong start after Rory Burns and Dom Sibley forged a 63-run opening stand.

Burns made 33 before attempting a reckless reverse-sweep against Ravichandran Ashwin, while Dan Lawrence fell lbw to Jasprit Bumrah before he could open his account.

Root himself survived a close run-out chance and was batting on four, with Sibley on 26 at the break.

Earlier, Root won the toss and elected to bat, thus avoiding batting in the fourth innings on a crumbling wicket.

Pace spearhead Bumrah’s first delivery in a home test could have been a wicket-taking one but a diving Rishabh Pant dropped a low catch to reprieve Burns, then on one.

India captain Virat Kohli introduced off-spinner Ravichandran Ashwin in the eighth over but there was no immediate breakthrough.

Burns then decided to play the reverse sweep, and the ball ballooned for Pant to take a simple catch.