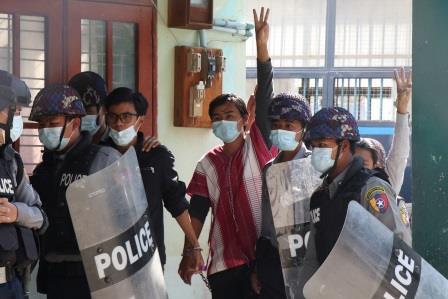 Students arrive at a court after being arrested in a demonstration against the military coup, in Mandalay, Myanmar, February 5, 2021. REUTERS/Stringer

Myanmar police have detained another key aide of ousted leader Aung San Suu Kyi. Moreover, media reports state that at least 30 people had been detained over pot-banging protests against a military coup on Friday.

Eleven Media quoted Maung Maung Aye, deputy head of the regional police force as saying pot-banging protestors were accused of breaking a law against “causing noise in public streets”. A teenager was among others arrested elsewhere over the noisy protests.

The latest high-profile detainee was 79-year-old Win Htein, a stalwart of Suu Kyi who was repeatedly imprisoned during their decades of struggling against previous juntas that led to the unsteady transition to democracy that began in 2011.

“We have been treated badly continuously for a long time,” he told Reuters by telephone as he was being taken away by police. “I have never been scared of them because I have done nothing wrong my entire life.”

There has been no outpouring of people onto the streets in a country with a bloody history of crackdowns on protests, but there were signs of coup opponents growing bolder – with dozens of youths parading in the southeastern city of Dawei.

With the UN Security Council calling for the release of Suu Kyi, international pressure on the junta is growing . Other world leaders too have criticised the coup. US President Joe Biden is considering sanctions on the ruling generals.