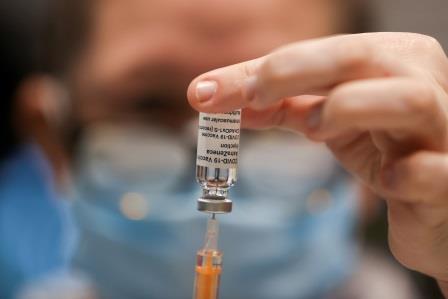 FILE PHOTO: A health worker draws a dose of the AstraZeneca's coronavirus disease (COVID-19) vaccine, at the vaccination centre in the Newcastle Eagles Community Arena, in Newcastle upon Tyne, Britain, January 30, 2021. REUTERS/Lee Smith

SEOUL (SOUTH KOREA) – According to a panel of South Korean advisers has urged caution over the use of AstraZeneca’s COVID-19 vaccine for people older than 65, citing a lack of data, the food and drug safety ministry said on Friday.

A decision to limit use of the vaccine, which is on track to become the first approved by South Korea, could complicate an inoculation campaign that puts priority on medical workers and the elderly.

The national pharmaceutical panel has cleared the vaccine for those older than 18, but advised caution on its use for those over 65, the director general of a national safety evaluation body said.

“The panel advised to offer the drug to people over 18, as Europe had recommended, but advised caution over the decision to inoculate those over 65, since no sufficient data has yet been collected,” said the official, Lee Dong-hee.

The advice comes in the wake of news that several European nations plan to restrict the vaccine to younger people, or are considering doing so, because of insufficient data on its efficacy in the elderly.

South Korea expects to receive the first shipment of the AstraZeneca vaccine as early as this month, as part of a two-way purchase deal for 20 million doses.

AstraZeneca sought emergency use approval on Jan. 4 for South Korea, which aims to grant it within 40 days.

The final review panel for the vaccine would also take into account overseas regulatory decisions, Lee, the director general of the National Institute of Food and Drug Safety Evaluation, told a news briefing.

South Korea wants to inoculate about 10 million high-risk people by July, aiming for herd immunity by November, the government has said.

It is expected to receive 117,000 doses of Pfizer Inc’s COVID-19 vaccine this month via the global vaccine sharing scheme COVAX, along with nearly 2.6 million doses of the AstraZeneca shots in the first half of 2021.