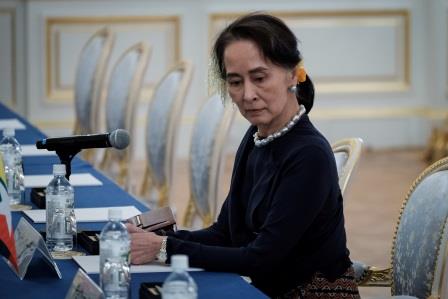 The United Nations Security Council has called for the release of those detained by the military, including Aung Suu Kyi. The military is currently facing mounting diplomatic and financial pressure to restore democracy.

The 15-member UN Security Council released a statement on Thursday stressing the “need to uphold democratic institutions and processes, refrain from violence, and fully respect human rights, fundamental freedoms and the rule of law.”

US President Joe Biden said the military should step down as the administration considered slapping sanctions on the generals responsible for Monday’s coup in the Southeast Asian country. He added that the United States was working with allies and partners to address the generals’ takeover.

“There can be no doubt in a democracy force should never seek to overrule the will of the people or attempt to erase the outcome of a credible election,” he said.

The leaders of Malaysia and Indonesia said ASEAN foreign ministers would be asked to hold a special meeting to discuss the situation in Myanmar. China’s UN mission said Beijing hoped the key messages in the statement “could be heeded by all sides and lead to a positive outcome” in Myanmar.

Japanese drinks giant Kirin Holdings said on Friday it is terminating its alliance with a top Myanmar conglomerate whose owners, according to the United Nations, include members of the military. Kirin said the coup had “shaken the very foundation of the partnership”.

Teachers became the latest to join a widening campaign of civil disobedience. “We only support the elected government and we will always stand with them,” university lecturer Nwe Thazin said. “We absolutely don’t accept the government which took power by force.”