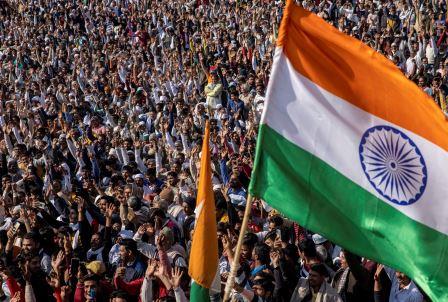 People raise their hands as they attend a Maha Panchayat or grand village council meeting as part of a farmers' protest against farm laws at Bhainswal in Shamli district in the northern state of Uttar Pradesh, India, February 5, 2021. REUTERS/Danish Siddiqui

KUNDLI (INDIA) – On Satruday protesting farmers went for a three- hour ‘Chakka jam’ or road blocade. Thousands of farmers across India blocked roads with makeshift tents, tractors, trucks and boulders to pressure the government to roll back agricultural reforms.

The months-long protest have now spread beyond New Delhi to a couple of neighbouring states.

“Today, the support of the whole society is with farmers,” Yogendra Yadav, a political activist who is one of the leaders of the farmers’ movement, said on Twitter. “Victory is certain.”

On a highway near the capital, some farmers smoked hookah as songs played on a loudspeaker.

Farmers squatted on the road in the eastern state of Odisha and southern state of Karnataka with flags and banners protesting against the laws, with some carrying placards urging the government not to treat them as enemies.

While the initial protests were started by rice and wheat growers from northern India support for them has been growing especially in states not ruled by Prime Minister Narendra Modi’s party.

The federal government has offered concessions to the farmers but refuses to repeal three laws passed last year that it says are crucial to bring new investment to the sector, which accounts for nearly 15% of India’s $2.9 trillion economy and about half its workforce.

But farmers fear the reforms will leave them at the mercy of big corporate buyers, gradually ending the current practice of assured government purchases mainly for grain such as wheat and rice.