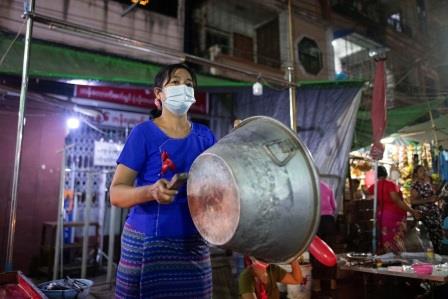 A woman wearing a red ribbon attends a night protest against the military coup in Yangon, Myanmar February 5, 2021. REUTERS/Stringer

“Military dictator, fail, fail; Democracy, win, win,” protesters chanted, as thousands of them took to the streets of Yangon on Saturday to protest against the coup and demand the release of elected leader and Nobel Peace Laureate Aung San Suu Kyi along with other leaders of the National League for Democracy.

“Against military dictatorship” read the banner at the front of the march. Many protesters dressed in the NLD’s red colour and some carried red flags.

The protest is the first sign of street unrest in a country with a history of bloody crackdowns on protesters. There were also anti-coup protests in Melbourne, Australia, and the Taiwanese capital Taipei on Saturday.

A civil disobedience movement has been building in Myanmar all week, with doctors and teachers among those refusing to work, and every night people bang pots and pans in a show of anger.

Demand for VPNs has soared in Myanmar, allowing some people to evade the ban. “We lost freedom, justice and urgently need democracy,” wrote one Twitter user. “Please hear the voice of Myanmar.”

Army chief Min Aung Hlaing seized power alleging fraud in a Nov. 8 election that the NLD won in a landslide. The electoral commission dismissed the army’s accusations. The junta announced a one-year state of emergency and has promised to hand over power after new elections, without giving a timeframe.

The coup had received international condemnation with a United Nations Security Council call for the release of all detainees and targeted sanctions under consideration by Washington.

Suu Kyi, 75, has not been seen in public since the coup. She spent some 15 years under house arrest during a struggle against previous juntas before the troubled democratic transition began in 2011.

“Of course, we want unconditional release as they have not broken the law,” said Khin Maung Zaw, the veteran lawyer who is representing both Suu Kyi and ousted President Win Myint.

Sean Turnell, an Australian economic adviser to Suu Kyi, has informed media on Saturday he was being detained.

“I guess you will soon hear of it, but I am being detained,” he said. “Being charged with something, but not sure what. I am fine and strong, and not guilty of anything,” he said through a text message.

In addition to about 150 arrests in the wake of the coup reported by human rights groups, local media said around 30 people have been detained over the noise protests.

Osaka's focus on consistency, not World No1 ranking