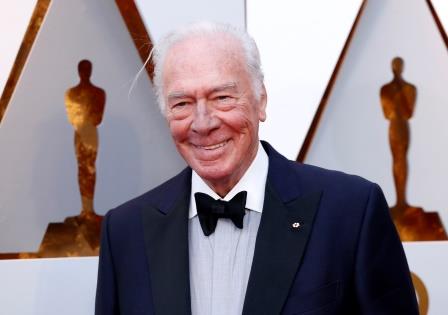 Canadian actor Christopher Plummer, who starred as widower Captain von Trapp in the 1965’s hit musical “The Sound Of Music” and in 2012 became the oldest actor to win an Oscar, has died at 91. Plummer passed away peacefully at his home in Connecticut with his wife Elaine Taylor at his side.

Julie Andrews opposite whom he starred in the Sound of Music said in a statement “The world has lost a consummate actor today and I have lost a cherished friend,”. “I treasure the memories of our work together and all the humor and fun we shared through the years.”

“Chris was an extraordinary man who deeply loved and respected his profession with great old fashion manners, self deprecating humor and the music of words,” manager Lou Pitt said in a statement.

Plummer, an accomplished Shakespearean actor had a successful career that spanned more than six decades. He was best known for his role in “The Sound Of Music,” which at the time eclipsed “Gone With the Wind” (1939) as the top-earning movie ever. At age 82, he became the oldest actor to get a competitive Oscar when he won for his supporting role in “Beginners” as an elderly man who comes out of the closet as gay.

“You’re only two years older than me, darling,” Plummer, who was born in 1929, purred to his golden statuette at the 2012 Oscars ceremony. “Where have you been all my life?”

One of his last major roles was as in the dark comedy “Knives Out” in 2019.

“This is truly heartbreaking,” “Knives Out” co-star Chris Evans said on Twitter. “What an unbelievable loss. Few careers have such longevity and impact. One of my favorite memories from Knives Out was playing piano together in the Thrombey house between set-ups. He was a lovely man and a legendary talent.”

Plummer appeared in more than 100 films and also was nominated for an Oscar for his portrayal of Russian author Leo Tolstoy in 2009’s “The Last Station.” He won two Tony Awards for his Broadway work, two Emmy Awards for TV work and performed for some of the world’s top theater companies.

Plummer was the father of Tony Award-winning actress Amanda Plummer.