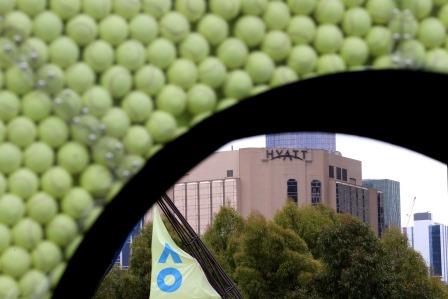 FILE PHOTO: Tennis - ATP Cup - Melbourne, Australia, February 4, 2021 General view of the Grand Hyatt in Melbourne. Play on Thursday was cancelled after a hotel quarantine worker in Melbourne returned a positive result for the coronavirus disease (COVID-19) Up to 600 players and support staff connected to the Australian Open will have to isolate until they have been tested. REUTERS/Loren Elliott

MELBOURNE (AUSTRALIA) – Tennis holds top position for Australian women, a new Nielsen FanLinks survey has revealed ahead of the country’s Grand Slam. Indigenous football code and cricket lags behind among the overall population.

Tennis comes in third on 41% ahead of swimming, rugby league, soccer, basketball, athletics, Formula One and cycling. Rugby union interested only around a fifth of those surveyed despite the Wallabies national team having won two World Cups.

Among women, however, tennis tops the rankings on 42% with only Australian Rules and swimming attracting the interest of more than a third of those surveyed.

The survey showed Australian Rules Football is the number one sport in Australia with over 46% of those asked expressing an interest in it, 3% more than cricket in second place.

“With the Australian Open tennis tournament getting underway next week, marketers seeking to up their games with females would be well served to take note of this fact,” said Marco Nazzari, Managing Director, International at Nielsen Sports.

The Australian Open starts on Monday at Melbourne Park, around 50% lower than usual because of health protocols.