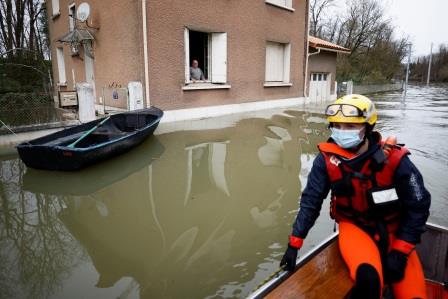 SAINTES, (FRANCE) – Following days of torrential rain, Southwestern France was hit by heavy flooding on Monday. Several regions including eastern Paris were on flood alert ahead of a cold snap expected later this week.

Waters were at waist level in several streets and knee-deep in large parts of the town. Hundreds of people were evacuated after water seeped into cellars and knocked out power supplies. Local authorities laid beams on cinder blocks so residents could walk from flooded houses to dry land.

To the southeast of Bordeaux, where the river Garonne flooded large areas between Marmande and La Reole last week, floodwaters were receding, but the waters of the Charente were not expected to fall before Wednesday, local authorities said.

“We are at a peak level now. We expect water levels to rise a little more in the coming days, and to subside from mid-week,” a Charente-Maritime spokeswoman said.

Seven areas were put on flood alert by the France Meteo weather service on Monday, including Charente-Maritime, two areas along the Loire river, the Somme and Oise regions in northern France and the Seine-et-Marne region east of Paris.

In Paris, many parts of the quays along the Seine have been inaccessible for days after the river broke its banks, but water levels, at 4.35 metres on Monday morning, remained well below recent highs of 5.88 metres seen in January 2018 and 6.10 metres in June 2016.

Along the river Marne, which flows into the Seine on the eastern edge of the capital, the river broke its banks in several towns, notably in Conde-Sainte-Libaire and Esbly, where several streets were flooded and elevated walkways were built.