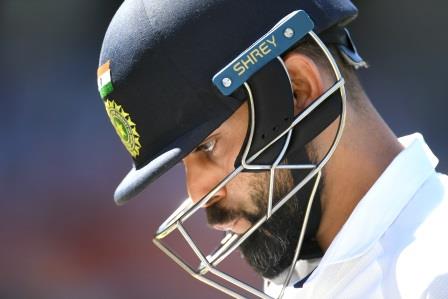 FILE PHOTO: Indian captain Virat Kohli leaves the field after his dismissal by Australian bowler Pat Cummins for 4 runs on day 3 of the first test match between Australia and India at Adelaide Oval, Adelaide, Australia, December 19, 2020. AAP Image/Dave Hunt via REUTERS ATTENTION EDITORS - THIS IMAGE WAS PROVIDED BY A THIRD PARTY. NO RESALES. NO ARCHIVE. AUSTRALIA OUT. NEW ZEALAND OUT/File Photo

India captain Virat Kohli did not regret picking Shahbaz Nadeem over Kuldeep Yadav but felt the support spinners had let the team down in their opening test defeat by England on Tuesday.

Kohli did not name the duo but when asked if he felt the support spinners had failed to put pressure on England, the India captain said, “Yeah, that’s a fair assessment.

“You need your bowling unit collectively to step up and create enough pressure on the opposition and we probably didn’t achieve that in this game.

“In the second innings we put enough pressure on them, but not enough to win a test match, not enough to come back into the game.”

Former England captain Michael Vaughan was among those surprised by what he called the “ridiculous decision” not to play Kuldeep, but Kohli said he wanted variety having picked off-spinners Ravichandran Ashwin and Sundar.

“When you play two off-spinners, Kuldeep more or less becomes a similar kind of spinner taking the ball away,” Kohli told a video conference.

It was a bitter return to action for Kohli who missed the last three tests in Australia to attend the birth of his daughter.

Tuesday’s loss was his fourth consecutive test defeat as captain and Kohli blamed it on how India batted in the first innings when they managed 337 in reply to England’s mammoth total.

“I think the test probably shifted in their favour when we batted in the first innings,” Kohli said at the presentation ceremony.

“We were looking to bat long and we were not able to do that. And I don’t think there was enough application shown by us as a batting unit.”

The second test, also in Chennai, begins on Saturday.