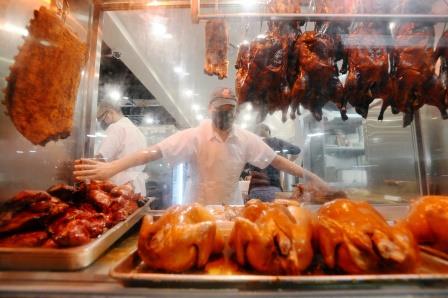 An employee reaches for roasted meat in the display window at HK BBQ Master on No. 3 Road, a Hong Kong style barbecue that is a crowd favourite among Hong Kongers in Richmond, British Columbia, Canada January 26, 2021. Picture taken January 26, 2021. REUTERS/Jennifer Gauthier

TORONTO (CANADA) – In a bid to escape political uncertainty, a second generation of Hong Kongers are heading to Canada for refuge.

As China tightens its grip on the territory of 7.5 million people, cities such as Vancouver and Toronto are a magnet for those looking to escape. Some 300,000 already have Canadian citizenship after many families initially moved there ahead of Hong Kong’s return from British to Chinese rule in 1997.

Back then, many families separated, with one parent staying in Hong Kong for work, usually fathers who were dubbed “astronauts” as they soared through the sky on visits. Among those who went to Canada, many eventually returned, lured by the booming economy and what still seemed to be a relatively free environment.

However, things have changed. With recent pro-democracy protests virtually snuffed out and Beijing enshrining control last year via a national security law, bags are being packed once more.

“Staying in Hong Kong is not an option anymore,” said Maria Law, 39, who moved to Vancouver last year with her two girls ahead of her husband. “I’d rather have a free future for my daughters instead of making money while they have to keep their mouths shut.”

For Law, a former flight attendant, history has repeated itself.

She is part of a rare cohort of double political emigres.

Taken to Vancouver when she was 12, Law remembers daily speakerphone calls from the living room with her father, who was earning the family bread as a hotel chef back in Hong Kong.

Enthusiasm for the calls waned as it became clear he was staying. Yet like many such “satellite” children, separated from one or both parents, Law eventually followed in her father’s footsteps to return to Hong Kong herself for work in 2004.

“When I was young, I asked my father why I had to move. But now I am in his position, I understand,” she said. “He sacrificed more than we did. He’s the one who had to be alone.”

Thanks to Canada’s liberal immigration system, 335,646 Hong Kongers moved there between 1984 when Britain’s handover was declared and 1997, according to the Canadian International Council think tank. That was most of the half-million exodus.

This time, Britain may take most Hong Kongers as it offers visas to potentially 300,000 people.

The flow to Canada may also be large, with existing Canadian passport-holders in Hong Kong from the first wave and new immigration pathways for the younger generation.

A Hong Kong government spokesman said concerns about erosion of freedoms were “totally unsubstantiated” and that the security law had stopped chaos. “People’s decisions to remain in or leave Hong Kong, or anywhere for that matter, are based on many factors including job situation, schooling, business and investment opportunities or personal/family reasons,” he added.

The scars of the first uprooting are informing the second.

“I’m not going to make the same mistakes as my parents, like having a satellite family,” said Tsang, a 36-year-old legal compliance officer who did not want to give her first name because she was yet to resign from work in Hong Kong.

Her parents’ marriage did not survive separation, but Tsang hopes to do better. Her daughter and husband move to Vancouver this month and she is to join them after selling their home.

In Law’s case, she is eagerly waiting for her husband, for whom it is a wrench to leave his wider family and career as a university IT officer, to rejoin the family in Vancouver.

In October, she gave him the sponsorship paperwork and urged him not to miss their girls’ growing up. To her relief, he returned the forms on Jan. 1. While he waits to travel, he watches his younger daughter’s growth spurt via a screen and waits for both girls to say hello before he sleeps.

It is hard to track exactly how many Hong Kongers are moving to Canada as so many can travel freely between the two.

The Hong Kong government did not have data, but the Security Bureau estimated 7,000 people may have emigrated in 2019, 1,300 to Canada. However, that methodology is based only on applications for documents showing no criminal records, which many departing Hong Kongers do not in fact request.

One frequently-asked-questions group by the “Return Vancouver” Facebook page has 5,800 members.

Miu Chung Yan, a University of British Columbia professor of social work, and himself from Hong Kong, said those returning to Canada were often giving up better-paying jobs at home but had long known they would return for children’s education or retirement.

Violent scenes of blazing streets and protesters clashing with police in 2019, plus China’s subsequent response, hastened their decision-making.

In Richmond, a Vancouver suburb, 21.9% of residents counted Cantonese as their first language, followed by 20% for Mandarin, the main language in the rest of China, in a 2016 census.

Pacific Mall’s corridors bear the names of major arteries in Hong Kong, such as Hollywood Road or Hennessy Road.

In nearby plazas, those nostalgic for Hong Kong fare can pick up warm pineapple buns with a cold slab of butter and Chinese-language newspapers Sing Tao and Ming Pao.

Jason, who plans to move back to Canada with his wife and nine-year-old twins, acknowledges he is “a little bit confused” about his identity.

His father moved to Hong Kong during Mao Zedong’s rule after four of 10 siblings starved to death in mainland China, he said. His parents sent him to high school in Canada in 1993 at 13.

But in 2001, his father’s construction company was struggling and he had to drop out of college to return to Hong Kong, where he later became a furniture salesman.

Over the years he noticed Hong Kong transforming: the luxury flats he fitted were increasingly owned by mainland Chinese. Mandarin became the more common language with customers in the famous IFC and ICC commercial towers.

“It’s kind of sad,” said Jason, who did not give his full name as he is yet to tell his twins about leaving. “Every time I have a gathering with friends or chit-chat with colleagues, the only topic is ‘where are you going to live’?”

New Zealand: Maori leader removed from parliament for not wearing a necktie