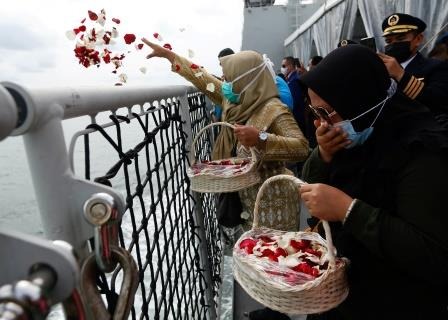 JAKARTA (INDONESIA) – Ahead of the release of a preliminary report, Indonesia’s air accident investigator will brief relatives of the 62 victims of last month’s Sriwijaya Air crash in Jakarta on Wednesday.

Rafik Alaydrus, whose wife died in the crash, said investigators on Tuesday told family members that the cause had not been determined but that various factors, including the plane’s autothrottle system, were being investigated.

“For family of victims, we do not understand about technical issues,” he said. “We responded this incident had happened and the victims should get their right compensation.”

Investigators quickly located and read the plane’s flight data recorder (FDR) and sent parts of the plane, including the autothrottle system that controls engine power automatically, to the United States and Britain for examination.

According to reports released by Wall Street Journal, the FDR data showed the auto throttle system was not operating properly on one of the plane’s engines as it left Jakarta.

Instead of shutting off the system, the FDR indicated the pilots tried to get the stuck throttle to function, the the report said. That could create significant differences in power between engines, making the jet harder to control. However, the National Transportation Safety Committee (KNKT) Chief Soerjanto Tjahjono last week said that the WSJ report was incorrect and that more information would be provided in KNKT’s preliminary report.