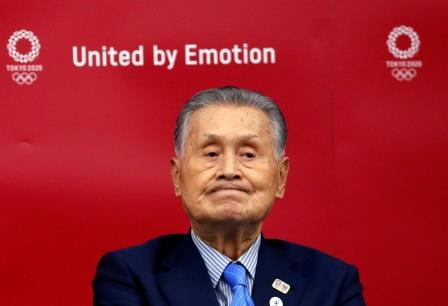 TOKYO (JAPAN) – The president of the Tokyo 2020 Olympics organising committee, Yoshiro Mori, will be resigning over sexist remarks, according to media reports on Thursday. The resignation will add to the mounting woes faced by the organisers.

The former prime minister made the remark – that women talk too much – at a Japanese Olympic Committee board meeting early this month, setting off a storm of criticism at home and abroad. His comment drew sharp criticism in parliament, where opposition lawmakers demanded his resignation, and from the public on social media.

Though Mori had retracted his comment at a hastily called news conference on Feb 4, he declined to resign at that time. Pressed on whether he really thought women talked too much, Mori said: “I don’t listen to women that much lately, so I don’t know”.

It was reported that, Saburo Kawabuchi, former Japan Football Association president and mayor of the Olympics village would replace Mori.

The 2020 Tokyo Games were postponed for a year because of COVID 19 and the pandemic is still creating huge questions about their viability, even though the government has said it is determined the July 23-Aug 8 Games go ahead.

Prime Minister Yoshihide Suga has said coronavirus vaccines are key to a safe Olympics and he said on Wednesday the vaccination drive would begin in the middle of next week.

Japan’s vaccination campaign is later than those in most major economies and any delay could sow doubts about a government aim to secure enough doses for everyone before the Olympics.