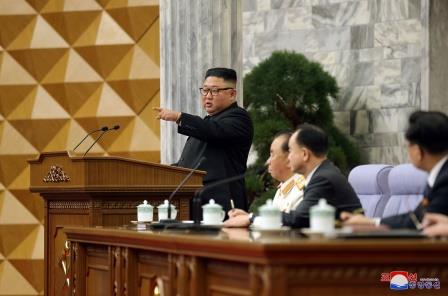 SEOUL (SOUTH KOREA) – North Korean leader Kim Jong Un has pulled up his cabinet and has accused them of drafting plans that did not advance significantly on previous ones and that had “failed tremendously on almost every sector.”

“The plans did not accurately reflect the party’s ideology and guidelines and lacked innovative insights and smart strategies,” Kim told the meeting, according to state media KCNA.

“As the cabinet almost mechanically put together numbers given by ministries, plans for some sectors were unrealistically elevated and others had lowered goals that were already easily achievable and must be done.”

The ruling Workers’ Party wrapped up its four-day plenary meeting on Thursday, where Kim also mapped out his vision for inter-Korean affairs and relations with other countries, as well as party rules and personnel issues.

With the economy topping the agenda, Kim reviewed action plans for his new five-year strategy, facing international sanctions, a prolonged border closure and reduced outside aid amid the coronavirus pandemic.

Replacing a previous construction plan that Kim described as too low and a product of “self-protectionism and defeatism” in the bureaucracy, the party decided to build 10,000 homes in capital Pyongyang this year.

He also called for enhanced self-reliance and the local production of goods and materials after trade with China, which accounts for about 90% of shipments into and out of North Korea, plunged more than 80% last year due to strict COVID-19 lockdowns.

The party also discussed personnel changes, promoting Foreign Minister Ri Son Gwon to the politburo shortly after reinstating him as an alternate member of the powerful governing body.