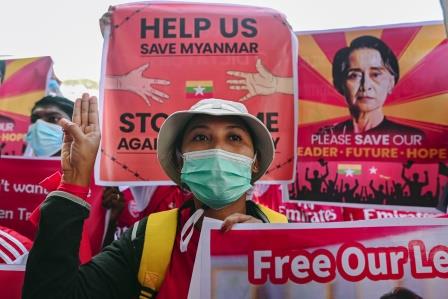 A demonstrator flashes a three-finger salute while holding a sign to protest against the military coup and demand for the release of elected leader Aung San Suu Kyi, in Yangon, Myanmar, February 12, 2021. REUTERS/Stringer

Myanmar: Protesters opposing the coup defied the junta’s call to halt mass gatherings on Friday as hundreds of thousands joined nationwide demonstrations. Many have urged Washington to toughen sanctions imposed on the ruling generals.

Thousands also gathered in Myitkyina, the capital of the far northern Kachin state, with young men playing rap music and staging a dance-off.

In the capital of Naypyitaw, some demonstrators put sheets over their heads and dressed as ghosts with sunglasses under the scorching sun. One carried a placard saying “Not all ghosts are scary. But the Burmese police are more frightening”.

Social media giant Facebook said it would cut the visibility of content run by Myanmar’s military, saying they had “continued to spread misinformation” after seizing power in the Feb 1 coup.

Security forces toughened stance and conducted a fresh set of arrests overnight. Those detained includes at least one doctor who had taken part in an escalating civil disobedience campaign.

Soldiers broke up a protest in the southeastern town of Mawlamyine and arrested several people. In the coastal town of Dawei, the streets were crowded with protesters giving fiery speeches, many carrying red flags with peacocks, a national symbol of pride and resistance.

As Washington announced sanctions, European Union lawmakers on Thursday called for action from their countries and Britain said it was considering measures to punish the coup leaders.

The US sanctions target 10 current and former military officials deemed responsible for the coup, including Min Aung Hlaing. It also blacklisted three gem and jade companies it said were owned or controlled by the military.

Supporters of Suu Kyi’s National League for Democracy (NLD) welcomed the US sanctions but said tougher action was needed to force the military to release Suu Kyi from house arrest and recognise the NLD’s landslide victory in November elections.

“We are hoping for more actions than this as we are suffering every day and night of the military coup here in Myanmar, ” Suu Kyi supporter Moe Thal, 29, told media.

“We want to finish this ASAP. We may need more punishment and action against Myanmar’s acting president and generals.”

Friday’s protests marked the seventh consecutive day of protests, including one on Thursday outside the Chinese embassy where NLD supporters accused Beijing of backing the junta despite Chinese denials.