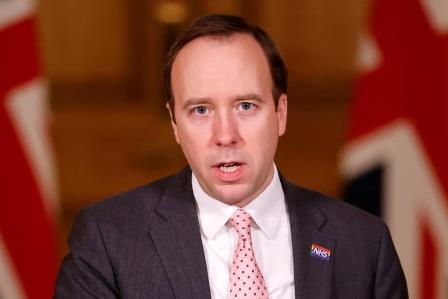 LONDON (UK) – British ministers, health workers and volunteers have been deployed for a weekend drive to encourage those in the most vulnerable groups to receive a COVID-19 vaccination, as the government nears its first target of delivering shots to top priority groups.

Britain says it is on track to have offered an injection by Monday to everyone who is aged 70 and over, as well as those who are clinically vulnerable, frontline health and social care workers and older adults in care homes.

More than 14 million Britons have received the first dose of a COVID-19 vaccine so far, and uptake stands at around 90% but the authorities hope to reach those who have yet to accept one.

Almost 30 government ministers will tour vaccination centres, from sports stadia to cathedrals, to spread the message of the importance of getting a shot.

“It is so important that everyone aged 70 and over who hasn’t yet had a vaccination comes forward this weekend and contacts the NHS (National Health Service) to book in their jab,” said health minister Matt Hancock.

There are concerns that some groups, such as certain ethnic minorities, are not taking up the vaccine offer to the same extent as the rest of the population.

The government said it will be using vaccination buses, WhatsApp groups and charities to reach vulnerable and under-served groups.

“We recognise that some groups feel more hesitant about getting a jab, or have more barriers, both physical and mental, preventing them from accessing one when it’s offered,” said Vaccine Deployment Minister Nadhim Zahawi.