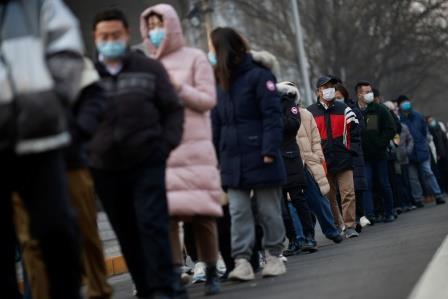 FILE PHOTO: People line up to get their nucleic acid test at a mass testing site following the outbreak of the coronavirus disease (COVID-19) in Beijing, China, January 22, 2021. REUTERS/Thomas Peter

SHENZHEN (CHINA) – China has recorded nine new COVID cases in the mainland for Feb. 14 as compared to seven a day earlier.

According to the National Health Commission, of the cases, eight infections originated overseas, while one case was recorded in Hebei province.

China saw a resurgence of the disease in January, when a new cluster emerged in Hebei and later took hold in northeastern Heilongjiang and Jilin provinces, in the country’s worst outbreak since March.

New asymptomatic infections, which China does not classify as confirmed COVID-19 cases, fell to 10 from 17 a day earlier.

China has been able to avoid another wave of COVID crisis during the Lunar New Year Holiday.

As of Sunday, mainland China had 89,772 confirmed coronavirus cases. The COVID-19 death toll remained at 4,636.