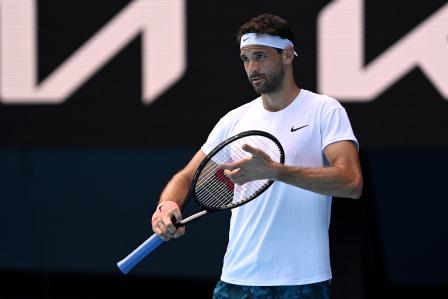 MELBOURNE (AUSTRALIA) – The world number 114 Aslan Karatsev continued his winning streak as he entered into the Australian Open semi-finals on Tuesday. Karastev beat an injured Grigor Dimitrov 2-6 6-4 6-1 6-2 to become the first man in the open era to reach the last four in his maiden Grand Slam.

Karastev was only the fifth qualifier to reach the last four of a men’s major in the open era and the lowest-ranked player to reach a Grand Slam semi-final for two decades.

Grigor Dimitrov took a medical timeout for treatment on his back after losing the third set but was only able to show flashes of his refined game in the fourth and at one point apologised to his box.

Karatsev showed no mercy to his injured opponent and broke the 18th seed twice to take a comfortable lead.

The Russian will meet eight-times champion Novak Djokovic or Alexander Zverev for a place in the final.

With his ATP Cup team mates Daniil Medvedev and Andrey Rublev facing off in a quarter-final on Wednesday, Russia are guaranteed to have two players in the semi-finals and could yet provide both finalists.

“I try not to think about it, I just look at the next match,” said Karatsev when asked about the prospect.