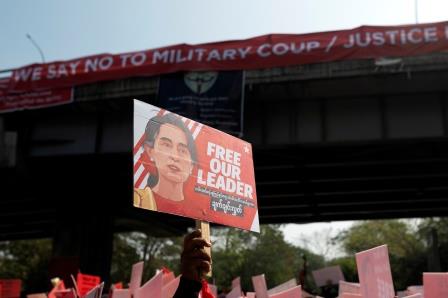 People take part in a protest against the military coup in Yangon, Myanmar, February 16, 2021. REUTERS/Stringer

Just hours after a UN envoy warned the Myanmar military of “severe consequences” for any harsh response to the pro-democracy demonstrations, Protesters blocked train services between Yangon and a southern city on Tuesday.

Despite the deployment of armoured vehicles and soldiers in some major cities on the weekend, protesters have kept up their campaign to denounce the military coup.

Protesters milled onto a sun-baked stretch of railway track waving placards in support of the disobedience movement, stopping the service between Yangon and the southern city of Mawlamyine. “Release our leaders immediately,” and “People’s power, give it back,” the crowd chanted.

Crowds also gathered in two places in the main city of Yangon – at a traditional protest site near the main university campus and at the central bank, where protesters hoped to press staff to join the civil disobedience movement.

About 30 Buddhist monks too joined in the protest and chanted prayers.

The turnout of protesters this week was much less compared to the thousands who joined earlier demonstrations, but opposition to the army takeover that halted a decade of unsteady transition to democracy remains widespread.

The army cut off the internet for a second consecutive night early on Tuesday though it was again restored at about 9 a.m. (0230 GMT)