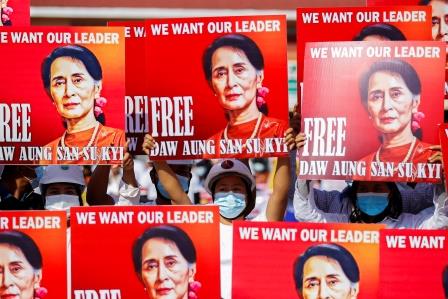 Demonstrators hold placards with the image of Aung San Suu Kyi during a protest against the military coup, in Naypyitaw, Myanmar, February 15, 2021. REUTERS/Stringer

In a call with the military leadership of Myanmar the United Nations special envoy warned them of “severe consequences” for any harsh response against protesters, said a UN spokesman.

UN Special Envoy Christine Schraner Burgener spoke on Monday to the deputy head of the junta in what has become a rare channel of communication between Myanmar’s army and the outside world.

“Ms Schraner Burgener has reinforced that the right of peaceful assembly must fully be respected and that demonstrators are not subjected to reprisals,” UN spokesman Farhan Haq said at the United Nations.

“She has conveyed to the Myanmar military that the world is watching closely, and any form of heavy-handed response is likely to have severe consequences.”

In an account of the meeting, Myanmar’s army said junta Number Two, Soe Win, had discussed the administration’s plans and information on “the true situation of what’s happening in Myanmar”.

Protesters have kept up demonstrations to denounce the military coup despite the deployment of armoured vehicles and soldiers to some major cities during the weekend.

An activist group, the Assistance Association for Political Prisoners, said it had recorded 426 arrests between the coup and Monday and it feared the military was using internet blackouts to arrest more opponents, particularly after it suspended legal constraints on search and detention powers.

The army cut off the internet for a second consecutive night early on Tuesday though it was again restored at about 9 am (0230 GMT). Army said late on Monday that protests were harming stability and had left people in fear.

“People are delighted to have the security patrols and the security forces will conduct them day and night,” its True News information team said.

The army took power alleging fraud in a Nov. 8 general election in which Suu Kyi’s National League for Democracy party had won a landslide. The electoral commission had dismissed the army’s complaints.

The coup has prompted an angry response from Western countries and the United States has already set some sanctions against the ruling generals.

China has, however, taken a softer approach, arguing stability should be the priority in its neighbour, where it has close contacts with the military and did not join the UN Security Council members in calling for the release of Suu Kyi and others.