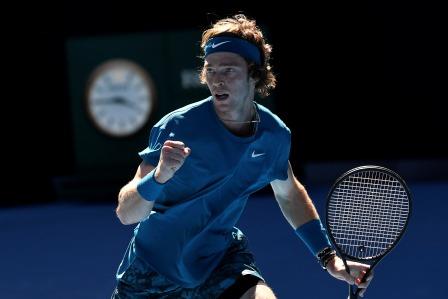 MELBOURNE (Australia) – Russia’s Daniil Medvedev ousted friend and compatriot Andrey Rublev 7-5 6-3 6-2 at Melbourne Park on Wednesday to secure a spot in the Australian Open semi-finals and extend his winning streak to 19 matches.

Following his victory at a scorching Rod Laver Arena, Medvedev, 25 said “”Super tough, if you come to Australia and it’s 40 (degrees) each day, it’s tough but you get used to it but we’ve had a couple of days when it was 20 degrees”

Rublev hit plenty of heavy groundstrokes at the start but struggled to find a way past his opponent’s defence. After a mid-set trade of breaks, Medvedev took the opener with a break to love in the 12th game.

The rallies grew longer as the match progressed and Rublev won a gruelling 43-shot rally in the sixth game, then slumped down beside his towel on the side of the court.

Rublev held serve for 3-3 and had three breakpoint opportunities in the next game but was unable to convert. Medvedev sensed his opportunity, breaking for a 5-3 lead and then seeing out the second set.

With his energy sapped and frustrations growing there was no way back for Rublev in the third set as Medvedev jumped out to a 4-0 lead before sealing the contest with a forehand winner.

“We had some unbelievable rallies, I’m one of the first players to make Andrey so tired … It’s hard to play (a friend) but we’re all so competitive, just need to win, get to that Grand Slam semi-final,” Medvedev said.

“That was one of my best matches … I beat him in three sets not even with a tiebreak so I’m really happy.”

Next up for the ATP Finals winner will be a last-four meeting against either second-seeded Spaniard Rafa Nadal or fifth seed Stefanos Tsitsipas of Greece.

“It’s unbelievable, I’m so happy for Aslan, he’s made history. I don’t know what he did in the pandemic, probably just worked hard I guess,” Medvedev said of 114th-ranked Karatsev, who at 27 is making his Grand Slam main draw debut.

“If we have an all-Russian final, it’s going to be a dream come true, but we both have tough matches. It’s so good for Russian tennis.”