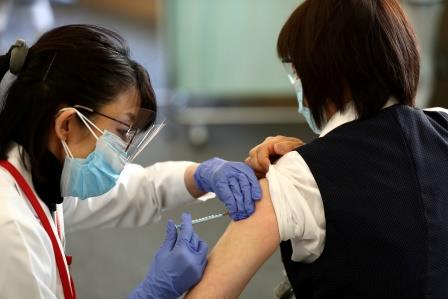 A medical worker receives a dose of the coronavirus disease (COVID-19) vaccine as the country launches its inoculation campaign, in Tokyo, Japan February 17, 2021. Behrouz Mehri/Pool via REUTERS

Some 40,000 medical professionals are targeted to receive the initial shot of the vaccine. They will be followed by 3.7 million more medical personnel, then 36 million people aged 65 and over.

“This is the first major step towards ending the pandemic,” Vice Health Minister Hiroshi Yamamoto told reporters at the hospital after the first vaccines were administered.

Vaccination programme chief Taro Kono said on Tuesday that a complete roll-out of vaccination could take a year. Authorities are aiming to secure enough vaccines for its entire population of 126 million by mid-2021.

There are also fears that millions of the Pfizer-Biontech vaccine doses could be wasted due to a shortage of syringes required to maximise the number of shots from each vial.

Tokyo Medical Center said it has enough supply for now of the low dead-space syringes needed to extract six doses from each vial. It plans to inoculate 60 people a day starting on Thursday in a bid to minimise the amount of vaccine that could go to waste and monitor people who receive a dose.

Hospital director Kazuhiro Araki said he wanted to set an example for others by receiving the first injection.

“I don’t like getting shots very much,” Araki told reporters. “I’m glad it didn’t hurt. I feel relieved.”

Suga has said that vaccine deployment will be critical to holding a successful Olympics.

Australian Open: Barty's dream run comes to an end, crashes out of quarters