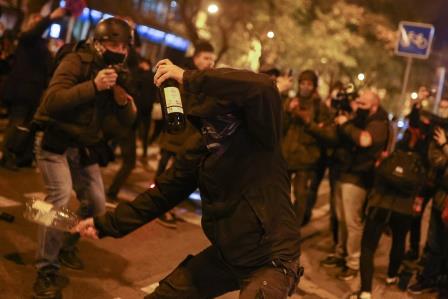 Supporters of Catalan rap singer Pablo Hasel take part in a protest against his arrest, after he was given a jail sentence on charges of glorifying terrorism and insulting royalty in his songs, in Barcelona, Spain, February 16, 2021. REUTERS/Nacho Doce

BARCELONA (Spain) – Thousands of protesters took over some of Barcelona’s streets on Tuesday evening to demand the release of a rapper Pablo Hassel.

Police stormed Lleida university in northeastern Spain earlier in the day and arrested the rapper after he had barricaded himself there. Hasel, known for his radical leftist views, missed a deadline last Friday to surrender to police to serve a nine-month jail term handed down in 2018.

His sentence had caused an uproar in Spain and led the government to announce it would make free speech laws less restrictive.

After Hasel’s arrest, Deputy Prime Minister Carmen Calvo told reporters that jailing people over matters of freedom of speech should not happen in a democracy like Spain.

“Victory will be ours. … There will be no forgetting and no forgiving,” Hasel shouted, fist raised, as he was surrounded by police and taken to jail, having several hours earlier retweeted the lyrics for which he was convicted. “Tomorrow it could be you,” Hasel added in a message to his 125,000 followers.

There were some clashes between protesters and riot police, with images showing rubbish bins on fire, looted shops and objects thrown at officers trying to disperse the crowd, sometimes using batons and foam projectiles.

Mossos d’Escuadra, the Catalan regional police, said on Twitter that protesters burned motorbikes and bins, creating barricades and blocking streets in Barcelona, and that 14 people had been arrested.