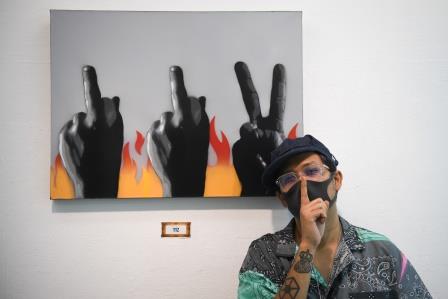 "Headache Stencil", a graffiti artist poses in front of his works during his "112 the Exhibition" at WTF Gallery and Cafe in Bangkok, Thailand, February 13, 2021. REUTERS/Chalinee Thirasupa

BANGKOK (THAILAND) – A Thai political street artist who does not disclose his original name or age and goes goes by the moniker “Headache Stencil” is exhibiting some of his riskiest work yet. his latest collection of paintings touch on the strict law that has seen dozens of people imprisoned for insulting the monarchy.

The artist launched the exhibition last week in a gallery above a Bangkok bar, on a day when four high-profile activists were put in pre-trial detention over their taboo-breaking calls to reform Thailand’s monarchy.

Thailand’s has some of the world’s strictest “lese majeste” laws, with a penalty of up to 15 years in prison for each offence in defaming, insulting or threatening King Maha Vajiralongkorn and his closest family members.

“I have experienced this severe law for a long time. Many people told me to stay away or not get involved,” said the artist, who typically spray paints on walls using stencils but has held numerous indoor exhibitions.

“But as an artist, I want to try with art and see how close I can get, how I can discuss it throughout my works.”

The artist’s complex collection of 14 paintings borrows images from the French revolution and includes symbols of the palace, such as crowns or royal parasols.

One shows the lower half of a flying garuda, a mythical bird that is used as a seal of officialdom, clutching what appears to be a protestor in a claw.

Another painting shows three hands side-by-side above flames, two with one-finger gestures and a third with a two-finger “V” sign, referencing the number 112, the article of the Thai criminal code covering royal insults.

“My paintings have to be open-ended and people need to interpret or solve them themselves,” said the artist, who said his name is a play on the headaches he believes he creates for government with his use of a stencil and spray paint.

“I just want people to see my artworks and interpret them and realise the humanity of those being charged,” he said.

“They didn’t kill anyone, they just disagree with someone. They should not go to jail for not loving someone that others do.”

At least 58 activists have been charged with insulting royalty since November over remarks at protests against a government backed by the military, which reveres the monarchy.