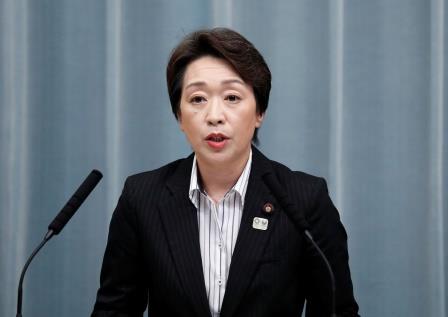 TOKYO (JAPAN) – Japan’s Olympics Minister Seiko Hashimoto is the preferred candidate to take over the role of Tokyo 2020 organising committee chief after her predecessor quit over sexist comments.

Former chief Yoshiro Mori resigned as president of the committee last week after his comments saying women talk too much was met with criticism from across the globe.

The panel will ask Hashimoto if she wishes to take the position, state broadcaster NHK reported.

“I am aware of the report, but the committee is an independent body that makes its own decision,” the government’s spokesman, Chief Cabinet Secretary Katsunobu Kato, said.

Asked by reporters if she would accept the post if offered, Hashimoto said “There’s nothing to say.”

Born days before Japan hosted the 1964 summer Games, Hashimoto was named after the Olympic flame. She took part in four Winter Olympics as a speed skater and three Summer Olympics as a cyclist.

A 56-year-old lawmaker in Japan’s ruling party, Hashimoto has served as the Olympics minister, doubling as minister for women’s empowerment, since 2019. If she took the post she would have to quit as Olympics Minister.

Tokyo 2020 said in a statement that at a first meeting on Monday, the committee agreed upon five criteria for the new president which includes a deep understanding of gender equality and diversity, and the ability to attain those values during the Games, organisers said in a statement on Tuesday.

The Games are set to begin on July 23.