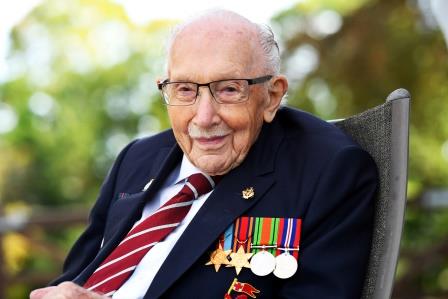 FILE PHOTO: Captain Sir Tom Moore smiles as he launches his autobiography book 'Tomorrow will be a Good Day' at his home in Milton Keynes, Britain September 17, 2020. REUTERS/Dylan Martinez/File Photo

His daughter said the online messages were kept a secret, saying the abuse from “a vile minority” would have broken his heart.

While he received tens of thousands of supportive messages there were some that mocked and abused him.

“It was as pretty horrific as it could be,” said Ingram-Moore.

“I couldn’t tell him because how do you rationalise to a 100-year-old man that something so incredibly good can attract such horror,” she said.

“It really did hurt and it really is hard to deal with but we have dealt with it and they will not win, they will never make this amazing thing negative.”

Moore became Britain’s favourite during the lockdown by walking around his garden with the help of a frame to raise 38.9 million pounds ($54.04 million) for the National Health Service.

With a quick wit, Moore brought a simple message of hope and self-sacrifice. He died on Feb. 2 after testing positive for COVID-19 on Jan. 22, and he was also fighting pneumonia.