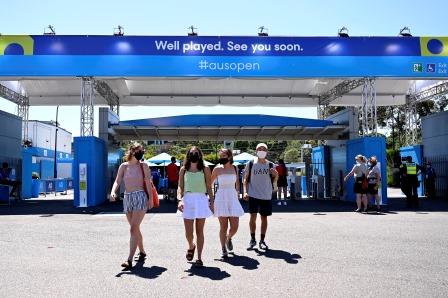 MELBOURNE (AUSTRALIA) – After the completion of Melbourne’s five-day lockdown to contain an outbreak of COVID-19, fans wearing masks returned to the Australian Open on Thursday to watch the Grand Slam’s semi-finals.

As Melbourne residents were released from social distancing restrictions, officials logged in zero new cases of the novel coronavirus in Victoria state on Thursday.

Players competed at empty stadiums at Melbourne Park through the five-day lockdown but reduced capacity crowds of 7,477 have been permitted in each of Thursday’s two sessions and the same number for the singles finals sessions on Saturday and Sunday.

Crowds were originally capped at 30,000 per day during the opening week of the tournament until lockdown started last Saturday.

Tournament organisers are desperate for fans to return after spending a huge amount of money to get the tournament up and running, including some A$40 million ($31 million) on putting players through 14 days of quarantine.

Most mobility restrictions in Victoria state were lifted at midnight on Wednesday, but masks remain mandatory both indoors and outdoors when social distancing rules cannot be followed.

While Australia has largely controlled the coronavirus within its borders, small outbreaks have occurred in the country’s biggest cities from quarantine hotels, resulting in short lockdowns.