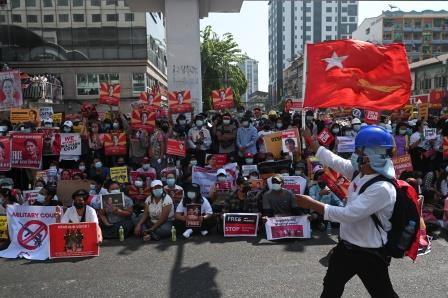 With protest against the Myanmar’s military coup gaining momentum, the army announced late on Wednesday that six celebrities, including film directors, actors and a singer, were wanted under an anti-incitement law for encouraging civil servants to join in the protest. The charges can carry a two-year prison sentence.

“It’s amazing to see the unity of our people. People’s power must return to the people,” actor Lu Min posted on his Facebook page.

The number of people known to have been detained since the coup halted a tentative transition towards democracy had reached 495 by Wednesday, Myanmar’s Assistance Association for Political Prisoners said in a statement.

It said 460 were still being held.

Thousands of chanting protesters gathered on Thursday at a busy intersection near the main university in Yangon. Motorists put up a different kind of protest in the region, when they drove at a snail’s pace, a day after many pretended to be broken down to block the movement of police and army vehicles.

Students were also due to gather in a different part of the city to protests against the Feb. 1 coup and detention of elected leader Aung San Suu Kyi.

In the city of Mandalay, protesters rallied to demand the release of two officials arrested in the coup.

More demonstrations were planned for Thursday – including by student groups and workers from different ethnic groups as coup opponents are deeply sceptical of junta’s promise to hand over power after a new election.