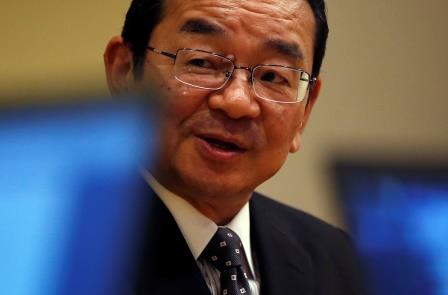 FILE PHOTO: Honda Motor Co. President and CEO Takahiro Hachigo is seen through screens of laptop computers as he speaks during a round-table meeting at the company headquarters in Tokyo, Japan November 21, 2016. REUTERS/Issei Kato/File Photo

TOKYO (JAPAN) – Honda Motor Co said on Friday Chief Executive Officer Takahiro Hachigo would hand over the reins to the head of the automaker’s research and development arm, Toshihiro Mibe, on April 1. However, Hachigo will remain on the company board.

Mibe, 59, joined Honda in 1987 and became the president of Honda’s R&D unit in 2019, working with Hachigo to push through structural reforms.

Mibe’s appointment comes as Honda races to catch up in the field of all-electric cars and faces competition from new entrants and tech giants such as Tesla, Apple and Amazon. To focus on zero-emission technology, Honda last year said it would stop participating as an engine supplier in the FIA Formula One World Championship at the end of the 2021 season.