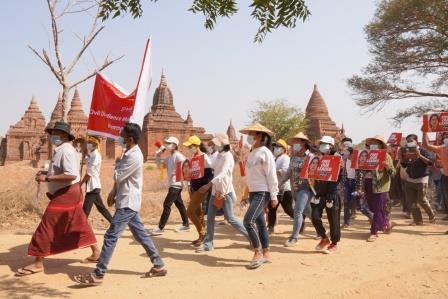 Demonstrators march during a protest against the military coup, near temples in Bagan, Myanmar February 18, 2021. REUTERS/Stringer

Youth leader and activist Thinzar Shunlei Yi cheered Britain’s asset freezes and travel bans on three generals as well as steps to stop any aid helping the military and to prevent British businesses working with the army. Canada said it would take action against nine military officials.

“We urge other nations to have such coordinated and united response,” she wrote on Twitter. “We will be waiting for EU sanctions announcement on 22nd,” she said, calling on people to gather at the EU office push for sanctions to include measures against military businesses.

A small group of opponents of the coup gathered outside the British embassy in the main city of Yangon saying they wanted to offer thanks for the support.

The Myanmar military junta is under extreme diplomatic pressure with Japan agreeing with India, the United States and Australia on the need for restoration of democracy after the army takeover in which elected leader Aung San Suu Kyi was detained on Feb. 1

The junta has not yet reacted to the new sanctions. On Tuesday, an army spokesman told a news conference that sanctions had been expected. Junta leader Min Aung Hlaing was already under sanctions from Western countries following the 2017 crackdown on the Muslim Rohingya minority.

“Sanctioning military leaders is largely symbolic, but the moves to sanction military companies will be much more effective,” said Mark Farmaner, director of the Burma Campaign UK group in a reaction to the sanctions.

Myanmar’s Assistance Association for Political Prisoners said 521 protesters had been detained as of Thursday. Of them, 44 had been released.